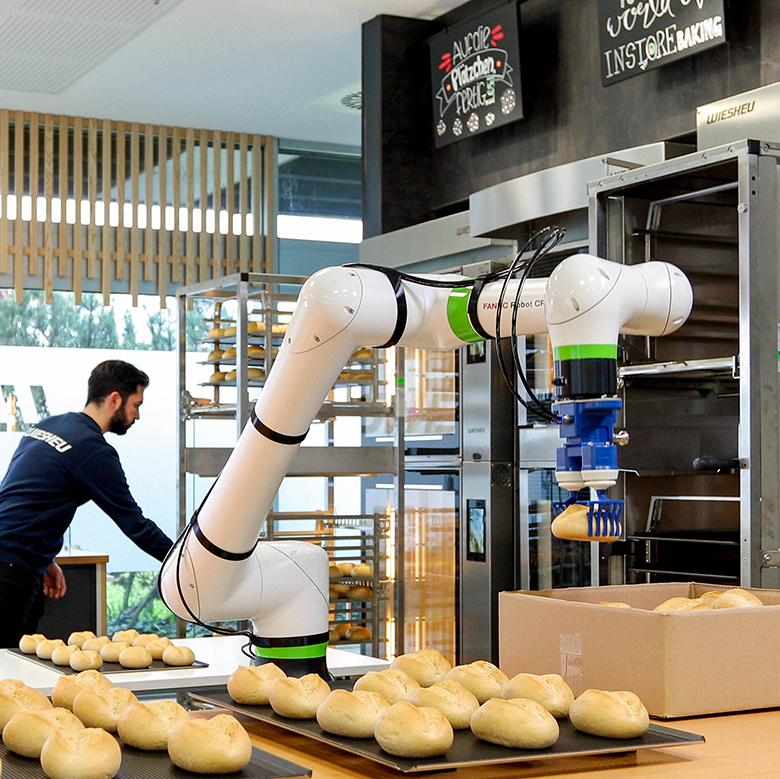 Baked fresh to the point!

As an experienced system integrator, ASA Automation enters the new field of collaborative robots for everyday needs of bakery products directly from the bakery store with the baking ovens from WIESHEU.

With the new CRX model from FANUC and an adapted gripper technology, ASA Automation shows a revolutionary solution and how easy it is to precisely and continuously automate the manual tasks involved in baking half-baked rolls to relieve employees.

An intelligent 3D camera detects the individual product in the commercially available loose fill in the carton. The information is digitally transmitted to the robot's control system. Using a product-specific gripper, the robot picks up the semi-baked goods in the correct position and fills the baking tray provided in the correct number and order.

Through a quick-change gripper system the robot automatically loads the oven with the filled trays and unloads them again automatically after the appropriate baking time. The TrayMotion loading system from Wiesheu works optimally with the collaborative robot from Fanuc. The robot also takes over the final presentation of the baked rolls by gently depositing them in the existing sales ladder.

This is where the harmonious interaction between man and machine becomes apparent. Without any protective devices (in accordance with the safety standards of ISO 10218-1) and without any danger to the employee, man and collaborative robot work "hand in hand", so to speak.