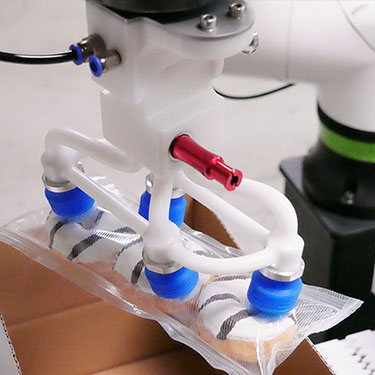 After more than two years of "trade fair abstinence" we presented ourselves again at one of the most important international food fairs.

For the first time after more than two years of "trade fair abstinence" we presented ourselves again at one of the most important international food fairs.

In April of this year, we were finally able to meet customers, business partners and other interested parties at ANUGA Food Tec 2022 in Cologne and present a future-oriented system that includes picking, packing and palletizing.

As a turnkey supplier, we followed the motto "One for all - all in one". With the help of three collaborating robots from the new CRX series and a Scara SR12IA from Fanuc, we vividly demonstrated a fully automated donut production line.

After the initial visual quality inspection, which included the inspection of the product shape, the decor, and the detection of the degree of browning, the finished donuts were subsequently sorted, packaged, and palletized fully automatically. The KI quality assurance system was provided by Cretec. The product-specific gripper technology came from LMD with in-house production of the parts using the 3D sintering process.

Enjoy watching our video showing the production line and a little insight into our exhibition booth.

Finally, we would like to take this opportunity to thank all visitors to our booth as well as our partners FANUC, Cretec and LMD. The personal exchange with you after such a long time felt really good and gave us new drive and momentum for the upcoming tasks.

Until then, your team from ASA Automation.